From Levi's to Zara, this is the Valencian technology that makes jeans for the world

The innovation is based on the use for the manufacture of laser, ozone and nanobubbles, which saves water consumption and prevents waste.

At the end of the year, around 50% of the 5,000 million jeans that are manufactured annually in the world will be made with the technology patented by a Valencian company, Jeanology, in plants of Paterna (Valencia), San Quirze del Vallés (Barcelona) and Izmir (Turkey). The goal is to reach 100% by 2025. This is what the marketing director of Jeanology, Carmen Silla, advocates.

It is not crazy. If 100% of the jeans were produced as Jeanology does, 250 million cubic meters of water, 2 billion KW / h and the emission of 500,000 tons of chemical waste into the environment would be saved annually. The textile industry is the second most polluting on the planet. 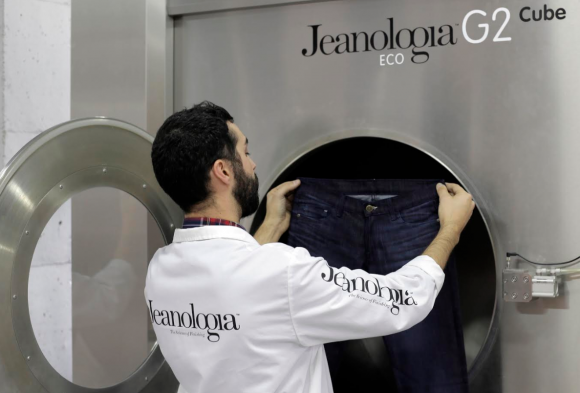 The technology and the export in the five continents of machines and services has made it possible for a company of just over 200 workers created in 1993 to invoice 65 million in 2017 and have the challenge of achieving 100 in 2018. Innovation is based on the use for the manufacture of laser, ozone and nanobubbles. The company also launched the Zero project in 2015, which allows, for the first time, to produce garments and textiles without any waste and without the need for water treatment, to the point that Jeanology allows a jeans to finish using only a glass of water (with the traditional clothing, 70 liters are spent).

Likewise, Jeanologia has patented its own Emark software, the most advanced on the market and aimed at production designers. This reduces the pre-production processes, simplifying the design, allowing more creativity and increasing industrial productivity. Thanks to the tools 'light tools' it is possible to create broken looks (Light Ripper), authentic and virtual bulging effects, as well as to achieve a worn effect with the use of ozone. This allows the use of the first certified washing machine as ecological.

The air in the atmosphere is introduced into the generator G, becomes ozone and moves inside the drum where the garment is discolored. As for the nanobubbles, these are produced by transforming the air from the atmosphere generating a mixture of water, products and air. It is in the 'skin' of this where the chemicals of the garment are transported.

And so, as explained by the CEO and founder of Jeanologia, Enrique Silla, has managed to close the circle and "a milestone for the textile industry because it transforms the process of jeans production in the world. We have succeeded in replacing all the dangerous techniques for workers with technology and that the polluting emissions of the textile industry are reduced by 4 years to 0%".